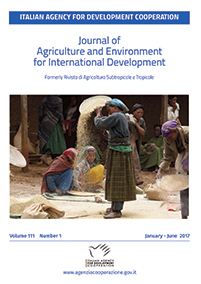 The influence of deficit irrigation (DI) with saline water on soil salinity in a drip-irrigated potato and millet fields was investigated. We had compared proportional soil salinity developed under Full and DI under drip irrigation. For both experiments, the treatments were (1) Full, control treatment where rooting zone soil water content was increased to field capacity at each irrigation; (2) DI80; (3) DI60 and DI40; 20, 40 and 60% deficit irrigation compared to Full treatment were applied, respectively. Soil salinity was assessed using the isosalinity maps constructed with grid soil sampling of plant root zone at harvest. Results show that high spatial variability was observed in salinity along soil profiles when applying saline water with drip irrigation for potato. For the DI40 and DI60 treatments, high soil salinity was recorded in the upper soil layer close to the emitter. Increase of soil salinity within soil depths of 30 cm or below was also observed under DI60 and DI40 treatments. The lowest increase was noted under the full treatment. Surface soil salinity was somewhat higher under DI60 and DI40 compared with that of full and DI80 irrigation treatments. The distribution of salts around the dripper changes during the crop season according to applied irrigation treatments, with overall higher concentrations between the drippers and towards the margin of wetted band. Iso-salinity maps at harvest of potato showed that the surface layer of 30 cm depth had the lowest salinity which gradually increased at deeper zones irrespective of the treatment. Salt accumulation essentially occurred at wetting front between the drippers and the plant row. Although salt accumulation was relatively highest along the row under DI treatments, the area of accumulation was relatively shifted toward the center between the rows and the drip line. The results also show the importance of the potato cropping season to benefit from the leaching of soluble salts with the received rainfall. For millet experiments, salinity was lowest under emitters and highest midway to the margin of wetted bands and higher soil salinity was maintained in the root zone with deficit irrigation treatments than full irrigation. Millet and potato yields were highest under Full treatment. Yields decreased almost linearly when applied water was reduced. However, reduction in quality was significantly important for DI60 and DI40. The analysis outcome of the crops sensitivity to salt indicated respectively for autumn, winter and spring potato and millet crops that thresholds are close to the value calculated from published salt tolerance data (1.9, 1.55, 1.85 vs. 1.7 dS/m for potato and 3.46 vs. 3.65 dS/m for millet) but the slopes are considerably steeper (34, 54, 47 vs. 12%; 17 vs. 6.7%), apparently because of the combined effect of salinity and water stresses. The results provide information’s to farmers for formulating improved planning regarding irrigation management practices. The results support the practicality of using the full irrigation (100% of ETc) methodology to optimize irrigation with saline water for potato and millet production and to control soil salinity. Under situations of water shortage, the deficit irrigation strategy (DI80 and DI60) is recommended as a tool to schedule irrigation of potato and millet crops in arid regions of Tunisia.
PDF