Climate change and farming systems in the region of Setif (Algeria) 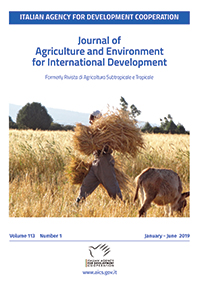 In Setif region (Algeria), the constraints of the semi-arid climate already limit farm profitability. Throughout the years, local farmers have modified their farming systems to mitigate the negative effects of climate. This paper aimed to describe the trend of climate change, its perception by the farmers and effects on the farming systems. The climate evolution was analyzed through the annual rainfall time series (1970- 2011) of 50 observation stations spread over the study area. A study of modifications in farming activities engendered by climate change, such as a shifting to new farming systems, was carried out on a sample of 537 farms spread over in three agro-ecological regions: the northern, central and southern zones. The annual rainfall of the period 1970-2011 over the study area was 457mm, However the annual rainfall maps for the periods 1970-1990 and 1991-2011 showed a high spatiotemporal variability, where some areas tended to become more wet, in contrast others areas were affected by drought severity  . The main changes in agricultural activities for adapting to climate constraint were a reduction of areas devoted to rainfed crops (cereals) and the adoption of an intensive farming system based on poultry, cattle breeding and intensive crops, especially in the central and the southern zones. Challenges of agricultural development programs in the context of future climate change will be to manage the conversion of the ancestral farming systems to sustainable systems, preserve the social value of agriculture and boost the economic profitability of farms without affecting natural resources.