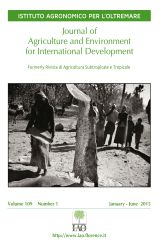 The aim of this work is to provide an easy methodology for the estimation of the Net Irrigation Water Requirements (Irnet) to be used in any developing country as first step in irrigation design. Two typical hot climate crops (maize - Zea mays - and cotton - Gossypium hirsutum), cultivated in the Piracicaba area, São Paulo (Brazil) have been studied. To estimate required data, different software were utilized. FAO software (EToCalculator 3.1 and CROPWAT 8.0) were adopted to compute Reference Evapotranspiration (ETo), Crop Water Requirements (CWR) and Net Irrigation Water Requirements (Irnet). RAINBOW (version 2.2) was used to examine the rainfall data from a statistical point of view in order to have a frequency analysis for the considered events. Daily climatic data for a twenty-year time period (January 1990 - December 2009) were analysed to calculate ETo. These data were obtained from the Agro-meteorological Station of ESALQ (Escola Superior de Agricultura “Luiz de Queiroz”), USP (Universidade de São Paulo), Piracicaba. Three representative years for dry, normal and humid conditions were identified out of the twenty-year time period (1991-1992, 2000-2001, and 1996-1997 respectively) in order to reach a more complete level of analysis. For each of the three years and with reference to the two crops under analysis, CWR and Irnet were computed. Along the three representive years, effective rainfall proved to be always higher than CWR and well distributed during maize and cotton crop cycles. As a conclusion no relevant water stress (no yield reduction) have been noticed in the CROPWAT 8.0 outputs. It was then possible to affirm that no irrigation is needed for this kind of climate and soil conditions. Keywords: Net Irrigation Water Requirements; Zea mais; Gossypium hirsutum; Piracicaba.
PDF