The date palms of Al Jufrah - Libya: a survey on genetic diversity of local varieties 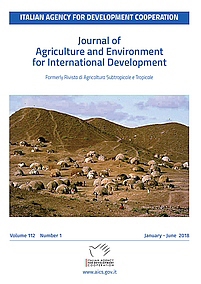 Date palm (Phoenix dactylifera) a long-lived dioecious monocotyledon is one of the oldest plants on the earth cultivated by humans and the most important fruit crop of arid climate regions in North African and Middle East countries. This review refers to the genetic characterization of a set of the more relevant date palm cultivars in Al Jufrah Oasis. This oasis, due to its position represents one of the most interesting Libyan regions for date palm cultivation. Molecular typing of 18 date cultivars, which are common genotypes in the five oases of Al Jufrah, was performed using 16 highly polymorphic SSR loci. The high level of genetic diversity observed among the cultivars is sound with data obtained with similar analysis on accessions from other countries of North Africa and Middle East. To understand the genetic history of date palms growing in Al Jufrah oases, we investigated the polymorphism of a plastidial minisatellite that discriminate between African and Middle Eastern varieties. Al Jufrah date palm revealed a very high frequency of western chorotype similar to that reported for Tunisian varieties and greater than those observed in Algeria, Morocco and Mauritania. Most of the time the cultivar of origin of male plant is unknown because of seed propagation. The assignment of male plants already growing in the farms to a cultivar of origin could give the possibility to choice the pollinators. The use of a genetic fingerprinting can be used to trace back the origin of the male plants. Three different methodologies for the analysis of the SSR data were compared to assign male plants to cultivars of origin. SSR markers, especially when different methods of analysis of polymorphisms are compared, can offer important indications, albeit not exhaustive, to assign unknown plants to a specific cultivar.
PDF