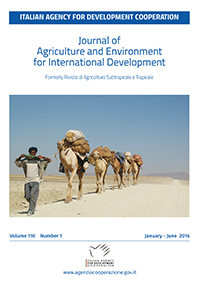 Parkia biglobosa is an indigenous species which, traditionally contributes to the resilience of the agricultural production system in terms of food security, source of income, poverty reduction and ecosystem stability. Therefore, it is important to improve knowledge on its density, current and future spatial distribution. The main objective of this study is to evaluate the tree density, the climate change effects on the spatial distribution of the species in the future for better conservation. The modeling of the current and future geographical distribution of the species is based on the principle of Maximum Entropy (MaxEnt) on a total of 286 occurrence points from field work and Global Biodiversity Information Facility GBIF-Data Portal-(www.gbif.org). Two climatic models (HadGEM2_ES and Csiro_mk3_6_0) have been used under two scenarios RCP 2.6 and RCP 8.5 for the projection of the species distribution at the horizon 2050. The correlation analyses and Jackknife test have helped to identify seven variables which are less correlated (r < 0.80) with highest modeling participation. The soil, annual precipitation (BIO12) and temperature (diurnal average Deviation) are the variables which have mostly contributed to performance of the models. Currently, 53% of national territory, spread from north to south is very suitable to the cultivation of P. biglobosa. The scenarios have predicted at the horizon 2050, a loss of the habitats which are currently very suitable for the cultivation and conservation of P. biglobosa, to the benefit of moderate and weak habitats. 51% and 57% are the highest proportion of this lost which will be registered with HadGEM2_ES model under two scenarios. These results revealed that the suitable habitat of the species is threatened by climate change in Benin. In order to limit damage such as decreased productivity, extinction of species, some appropriate solutions must be found.
PDF